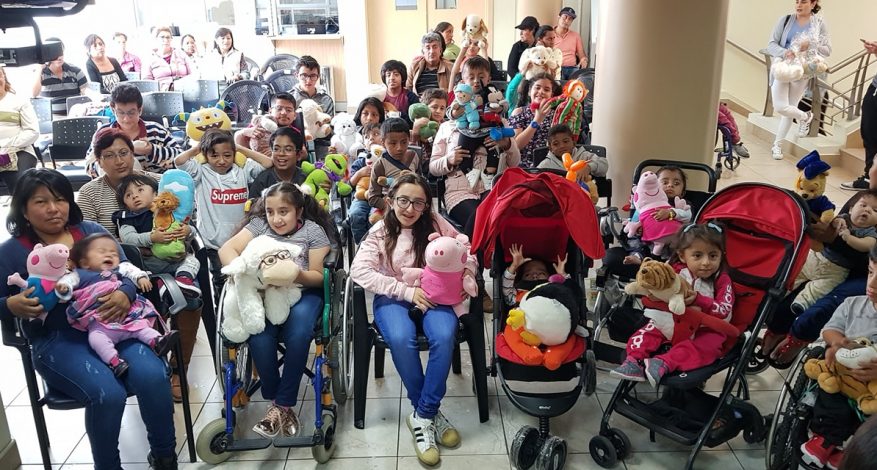 Interview with María Barbero, Founder and President of Padrinos-OI

Padrinos-OI is a non-profit organization (and supporting member of the OIFE) that originally provided sponsorships with the aim of helping individual patients with OI where medical care would otherwise be impossible. Now Padrinos-OI only works with national organizations that ensure the framework conditions for professional medical care on site. Maria Barbero has been the president of Padrinos-OI since its foundation in 2006. 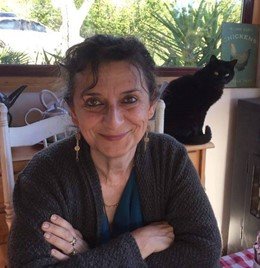 Are you involved in OI-organizations?

As I said before, I was the founder of the first Spanish OI site and the first Spanish-speaking OI network. The site started functioning in 1997, and with the contacts I made through my website, from people from Ecuador, Perú, Cuba, Spain, México, Panamá, Venezuela, Brazil and Argentina in 1998 we initiated an OI mailing list which had members from most of the Spanish speaking countries which were connected to the world wide web in those early Internet-times. We had our first personal Spanish meeting during the international OI conference which took place in Montreal in 1999. Our list soon grew to be a very useful instrument of contact between OI families and the very few medical specialists on OI who would devote time to offer online insight and treatment tips. I would like to specifically mention Dr. Horacio Plotkin and Dr. José Ignacio Parra, who always answered consultations from their respective offices in Montreal/ Omaha and Madrid, and who were the corner stone of our small OI community. 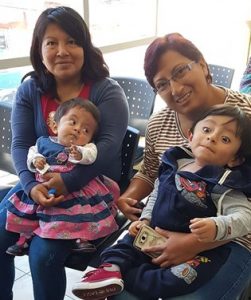 This mailing list kept functioning until 2010, when we moved to the more up-to-date form of a Facbook group. And through these channels, I had direct contact with country OI-organizations that made me aware of the acute treatment need of OI children and adults living in countries without a satisfying health infrastructure. To cope with these needs, in the year 2003, I initiated a private network of contributors among my friends and colleagues. Some of them offered their support to pay for the medical treatment of OI children in Ecuador and Perú. To increase the transparency of this growing private network, in the year 2006, with the help of some other engaged German and Spanish OI people, I founded in Germany the charity OI-Paten/Padrinos-OI, an official and legally constituted non-profit organization whose aim is to cover the medical treatment of OI people around the world.

We are a small charity that raises between 15.000 and 20.000 Euros a year. Therefore, we cannot pay for expensive surgeries. However, we are effective enough to be able to cover OI specific medicines (Pamidronate and Zoledronate, and clinical supplies) as well as orthopedic equipment in countries where these treatments would otherwise not be available for children and adults who couldn’t afford them.

What kind of work is Padrinos-OI doing?

The work we do can be divided into three areas: 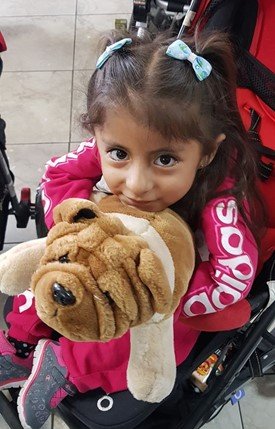 • We regularly cover the medical treatment for people with OI in the countries where we are active. These treatments take place in coordination with the local organizations. What we cover are mostly medicines (bisphosphonates, vitamins, and calcium supplements), but we also pay for the basic material needed to apply the treatments: needles, disinfection supplies, cotton, x-rays, blood work, bone densitometries. We also pay for physical therapy treatments.

• We provide people with OI with medical equipment: wheelchairs, crutches, and walkers.

• Our third special field of action is the organization of teaching surgeries and medical workshops on OI in developing countries. We send medical specialists to perform teaching surgeries that help the patients locally in their country and serve to teach surgeons and other medical specialist about the treatment of OI. In those cases, we pay for rods, x-rays, surgical material, for the transport of specialists who perform these surgeries and for the material needed for the patient treatment.

Regarding the countries we are active in, we have been working since 2006 without interruption with Ecuador and Perú. In a sporadic manner we have offered support in El Salvador, Honduras, Cuba or Panamá. We also develop individual projects to support treatment for single individuals in other countries. One of such projects is currently working in Nepal. We had one of those in Afghanistan (child is now happily living in the US) and in Turkey, Mongolia and Yemen.

We have an extremely lean organization, with only five members in our board (president, treasurer, secretary and two speakers) and two more liaison members, who respectively sit in Perú and Ecuador. We also have some supporting paying members who support our activity but are not involved in the decision-making. And then we have sponsors that send us money, monthly or yearly, to cover the treatment expenses of the OI people we support.

The whole organization functions on a volunteer, non-paid basis. Our two members in South America inform us about the upcoming treatments and necessities to be covered in the local organizations. We regularly (bi-monthly) send money to Perú and Ecuador, and our counterparts there organize the treatment and send us the invoices, the pictures taken during treatment and the letters or messages from the OI people we help to treat.

For the countries where bisphosphonates are not available, we buy the medicines elsewhere and send them to our counterpart in the country. It is important to say that we always have a local counterpart who has a medical background. We work basically only with long established OI organizations, not with private persons. In case there is no functioning organization in the country, we need an application from an interested party (parent or medical specialist) who does not only seek the interest of his own child, but who tries to help a group of OI patients. The counterpart in the country needs to make sure that a local medical specialist gets in touch with our OI specialists in Spain to get advice and medical protocols. We do not provide any kind of medical advice, and we only send medicines when the contact with a responsible medical professional has been made.

What have been the biggest challenges and successes? 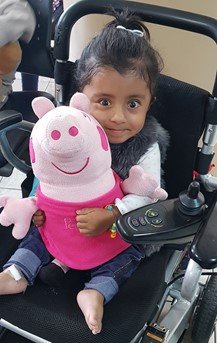 The biggest successes have been our collaboration with local entities, like the FEOI in Ecuador, for the regular treatment of OI patients. Every three months at the beginning of our activity, twice a year now, with the new drug therapies. Also, I need to mention the organization of two teaching surgeries and conferences for medical professionals in Ecuador. These two events took place in 2006 and 2011 and there we could reach out to the medical professionals and take direct contact with children, adults and families we had been supporting since 2003. The medical events have constituted a before and an after regarding the OI treatment in Ecuador. Doctors from other South American countries also joined the conference to get an insight in OI from well-known international medical specialists.

We tried to do the same in Cuba in 2014, but the response from the medical side was not so satisfying. Nevertheless, through contact with the Cuban patient community, we got some very needed surgeries were performed. And those patients have had a much better fracture-free live since then.

Another big challenge was the attempt to organize a first Central American OI conference in Honduras in 2016. This was not possible due to internal problems with the local organization. We hope that this long overdue Central American OI Teaching Seminar can be made reality at some point in the future.

Are there any personal connections between the sponsors and the supported?

The main idea in the private network that originated in Padrinos-OI was to keep a personal contact between the sponsors and the families of the children and adults who were receiving the donations. This ended up being extreme difficult for two reasons:

• The private contact too many times led to high expectations from the families of OI patients. They would often misuse the contact to ask for further financial support for non-OI related issues.
• As the circle of supported OI patients grew bigger, it became increasingly difficult for our very small organization to keep the many sponsors informed about the individualized highlights of every patient. With over one hundred OI patients receiving medical care through Padrinos-OI, the number of letters, e-mails, pictures and emergency information that needed to be sent to the different sponsors grew exponentially and made it impossible to keep up with the personal contact. Especially since some OI-children and adults have more than one single sponsor.

Now the collected funds we receive are not personalized for a concrete patient, but sent as a whole amount to the organization, that uses it to cover the general needs of all patients. The sponsors receive a yearly newsletter about the project with information about the work that has been done. We also have a small private Padrinos-OI Facebook group where we regularly post information about the treatments that take place. In case that a sponsor wishes concrete information about a child he has been sponsoring, he can address our local counterpart organization and ask for information on that person. The local families never get the private contact nor the information of the person who sponsors them.

How can people support the work you do?

For any information about financial support, you can write to padrinos@oife.org. We accept one-time donations, as well as regular financial support. As we are a legally registered charity in Germany, we can provide our donors with tax relevant certificates of donation.

The other kind of volunteering we could use would be somebody who could help us make an easy maintenance webpage for Padrinos-OI. We used to have one, which became obsolete some years ago, and we never had the time nor the skills to prepare a new one. 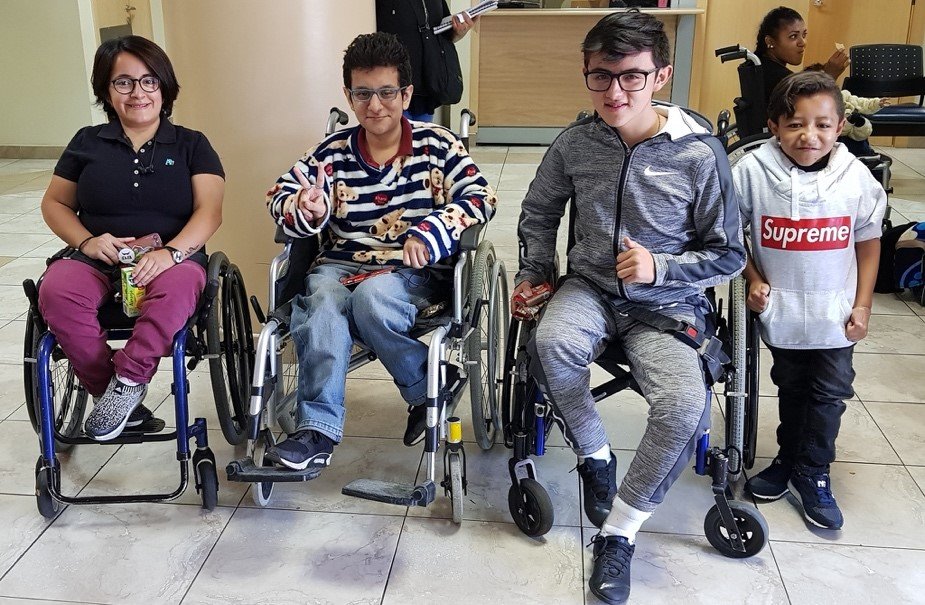 Have you worked together with OIFE’s Flying OI Experts Project? 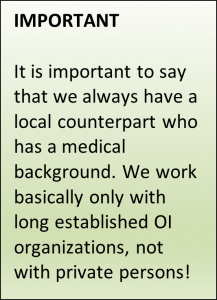 Yes! We enthusiastically support the idea of the Flying OI Experts OIFE project. We have worked together both for our Ecuador Conference project as well as for the Cuba Medical Workshop project, and we had the chance to bring people from Honduras to the OI Conference in Lisbon thanks to the Flying OI Experts project. We could never have gone so far in our efforts to educate the medical community without the OIFE support, and I would like to underline that this is one of the most beneficial OI projects for people with OI who don’t have access to a solid health infrastructure. Bringing OI specialists to the countries where they are needed and having those specialists showing local doctors and medical personnel how to treat OI people is the most relevant action that needs to be performed, in order to consolidate effective OI treatment all around the globe.

Any message for the readers of OIFE Magazine?

Thank you for reading these words. And thank you to all of you that work to create a more informed, more proactive and healthier OI community worldwide!

If you like to support Padrinos-OI with a donation or help by making an easy maintenance webpage, please contact Maria Barbero at padrinos@oife.org.

This article was first published in OIFE Magazine 1-2022.