One month to Rare Disease Day!

Today marks the launch of the OIFE awareness campaign connected to Rare Disease Day which takes place on the last day of February each year.

What is Rare Disease Day?

The main objective of Rare Disease Day is to raise awareness amongst the general public and decision-makers about rare diseases and their impact on people’s lives.

Rare Disease Day is an initiative from EURORDIS, which is an alliance of 949 rare disease patient organisations from 73 countries that work together to improve the lives of the 30 million people living with a rare disease in Europe. EURORDIS has already launched their own campaign that primarily targets the general public and also seeks to raise awareness amongst policy makers, public authorities, industry representatives, researchers, health professionals and anyone who has a genuine interest in rare diseases.

The EURORDIS campaign 2021 continues the concept line shared in 2020 starting from the idea of redefining of the word Rare, not only through number and evidence based facts as last years, but through the individual stories of people living with a rare disease.

EURORDIS has selected 6 Hero Stories representing 6 continents, 6 portraits, 6 heroes, 6 lives. Harvey, Syafiq, Angelina, Tristan, Regina and Jon-Kristian (boy with OI from Norway) share their experiences from across the globe, to show that while each rare disease is rare, as a community, we share a lot.

OIFE, as member of EURORDIS, will join and support the campaign and the initiatives from EURORDIS throughout the next month.

OIFE has also put together an OI focused awareness campaign inspired by the concept shared by EURORDIS for 2021. Each rare disease, each person, each life is made up of different aspects, different shades and different colours. All of them are worth to be known, and told.

The colours of OI

OI fits perfectly to the idea of the campaign as it is a spectrum disease that can show and express itself in so many different ways and have impact on so many different aspects and levels of people’s lives. OIFE took the opportunity to create a communication mix able to provide information and educate on some lesser known aspects of OI, but also to tell about psychosocial aspects. Finally we want to stress that people with OI do not want to be defined by their diagnosis. There is so much more beyond fractures and pain. There is a life that is worth to be lived to the fullest.

What is going to happen? 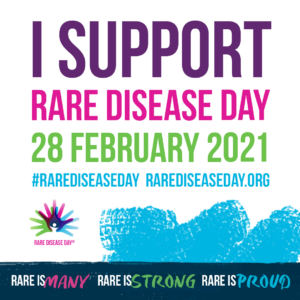 Starting from the 1st of February OIFE will publish on a daily basis posts and contents related to the Rare Disease Day campaign. The materials have been selected and organized in weekly themes. Each theme will be launched through an OI Quote coming from movies, OI activists, books, etc…

Week 1 What is OI?
Week 1 is aimed to spread awareness on the diagnosis itself, on the different types, and on the possible treatments, as well as on the difficulties in accessing some kind of treatments. Lesser known aspects and complications of OI will also be addressed.

Week 2 – Psychosocial aspects of OI / Living with OI
The second week will be about social life and social relations, but also about possibilities and self-awareness as an important asset that allows individuals to be aware of possibilities and risks and live life to the fullest.

Week 3 – Parenthood, Parenting & Family Dynamics
Becoming a parent both as a parent with OI or of an OI child can be challenging, especially in a ableist environment, but not impossible. Also family dynamics can become affected when OI is involved.

Week 4 – Rare Disease Day Week
This week will be dedicated to the last preparation towards February 28th, and will be marked by a few important events.

On Monday 22nd the Rare Disease Week (RDW) organized by EURORDIS will start. It will be a week-long series of events open to selected participants who have taken part in a series of preparatory webinars. The goal is to empower rare disease patient advocates with knowledge and skills to effectively participate in advocacy activities at the European level and as a result influence the EU decisions that have a direct impact on the lives of people living with a rare disease. Through RDW, the hope is to raise awareness of rare diseases and present a strong and united message to Members of the European Parliament (MEPs) and other policy-makers in Brussels on behalf of the rare disease community.

OIFE will be represented by our Youth coordinator Stephanie Claeys (from Belgium), but the OI community will be also represented by Lars Nesset Romundstad (from Norway) Marta Rodrigues (from Portugal).

During the week they will get personal contact with a Member of the European Parliament and discuss with them themes like: Political & Strategic Frameworks Relevant to Rare Diseases, Access to Healthcare, Diagnosis and Research for Rare Diseases, Available, accessible and affordable treatments Data Collection and Utilisation, Integrated, Social and Person-Centred Care for People with Rare Diseases or Patient partnership.

On Tuesday 23rd the Rare 2030 Conference will take place. The Rare 2030 Final Event marks the end of the two-year foresight study and will be the occasion to present the Rare 2030 policy recommendations for a new policy framework in presence of high-level speakers, such as Member of Parliament Frédérique Ries, or European Commissioner for Health and Food Safety and Stella Kyriakides to name just a few.

The conference is open for everyone. But to attend registration is requested via https://www.rare2030.eu/

OIFE and the OI community will also be represented in this important conference as, Rebecca Tvedt Skarberg (ERN BOND ePAG) will be one of the keynote speakers at the conference.

On Wednesday 24th it’s time to celebrate the 10th edition of the EURORDIS Black Pearl Awards. Since 2012, EURORDIS has organized this event to recognize the major achievements and outstanding commitment of patient advocates, patient organisations, policymakers, scientists, companies and media who strive to make a difference for the rare disease community. The award name comes from the fact that the formation of a natural black pearl is extremely rare – just like these pearls, the recipients of the EURORDIS Black Pearl Awards are unique and deserve recognition and admiration. Despite important advances, the rare disease community continues to face enormous challenges for this reason the work and achievements of the awardees are of paramount importance to improving lives and finding treatments for people living with a rare disease. The ceremony will be online. For registration and info go to https://blackpearl.eurordis.org/about/

Together we are Strong and we are Many!

As you can see, it will be a full month packed with information and activities. OIFE invites all our member organizations, their members and other individuals interested in OI to take part by sharing their stories, resharing posts from OIFE and the other OI-organizations and get involved in #RareDiseaseDay 2021! 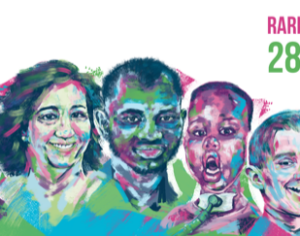