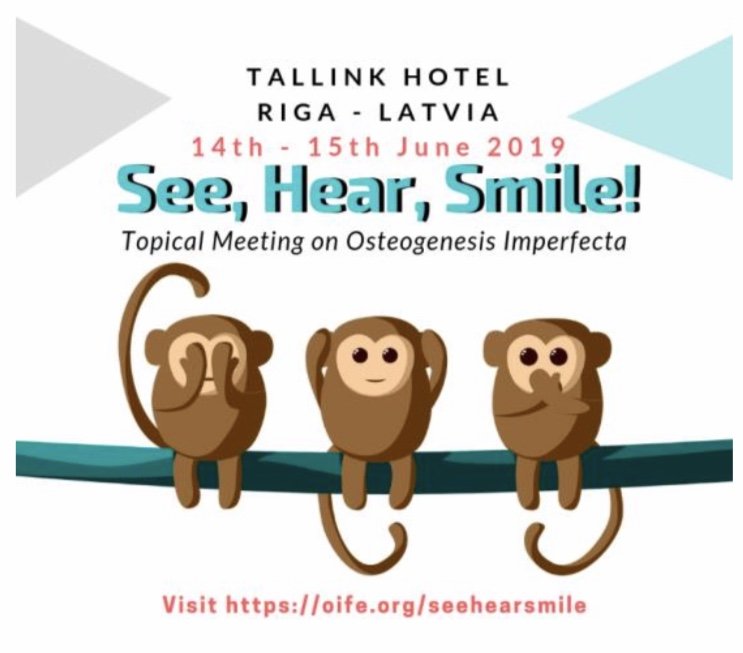 The title and graphic identity of the Latvia meeting Jean Moitry and I attended in Riga is a reference to the Chinese tale of the three monkeys. One of them doesn’t see, the second doesn’t hear and the third hides his mouth. This is an optimistic message because the meaning of the parable is that if you choose not to listen to evil, not to look at it, nor to repeat negative ideas to others, you are a wise-man/wise-woman.

More literally, when one is a person with OI, one may have in addition to orthopedic problems, issues with one’s sight, or one’s hearing, or with jaw deformities or one’s dental system that may cause pain, teeth fragility all the way to affecting one’s self-esteem especially during teenage years (smile). Behind this humorous and welcoming entry, the rich program Ingunn and OIFE had devised contained arduous scientific material not always easy to apprehend for a neophyte like me, when it comes to all the background knowledge about our pathology. Let’s try to summarize and indicate a few tracks. 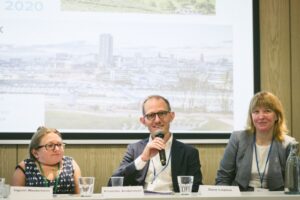 Introductory words the organizers were followed by a general presentation of OI by Dr. Antonella Forlino, explaining different ways to classify OI, the Sillence classification and the classification with the 19 different genetic types. Research pertaining to the mutation classification could lead to more specific treatments and follow up in the future.

Day one was first devoted to eye pathologies which can occur due to thinner sclera and cornea and then to dental treatments and jaw function problems pertaining to OI patients suffering in these areas. We learnt that serious vision problems such as glaucoma or cataract seem to affect less than 5% of OI people of any type, and are therefore reported as less prevalent in OI patients than in the average population. Dr Janna Waltimo Siren and Dr. Suken Shah then approached skull base deformities and basilar-invagination which may appear in as much as 25% of the OI population (30% of types III and IV). Concerning dentinogenesis imperfecta (=DI), according to an Eastman Institute study, among 50 patients of all types of pathologies suffering from DI 28% had this condition due to OI. DI mostly affects OI types III and IV, much less type I. In Northern Europe, several studies have been devoted to its various forms notably within the TAKO and the Eastman institutes networks. Dr. Agnes Bloch-Zupan, a pediatric dentist and biologist at the IGBMC Centre of reference on mouth and dental disorders in Strasbourg (France) then spoke of her research within the European program Interreg V RARENET on rare dental diseases, among which OI had been included. That same day we learnt from Dr. Manuel Joaquin de Nova Garcia that the effects of anti-resorptive treatments such as bisphosphonates on the evolution of dentinogenesis have been studied: they seem to be causing dental malocclusions in some patients. Studies about the consequences of such treatments in relation to hearing loss apparently have not yet been made. 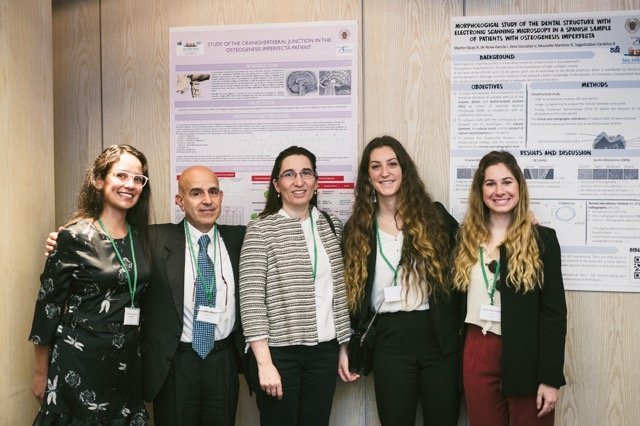 On the second day, we were given an overview of the various forms of hearing deficiencies in OI. It is commonly said that about 50% of us will suffer from hearing loss. Within the framework of a Danish study, 60% of examined ears in O.I. patients were affected. A lot was learned about the prevalence of deafness due to transmission failure (middle ear) in comparison with hearing impairment caused by perception defects (i.e. inner ear, cochlea affections). Optimal ways of detecting, treating and following up the various types of deafness in OI, were detailed by audiologist Freya Swinnen.

I noted that there appear to be less studies produced nowadays about “deafness and OI” than in the 1970 to 2000 period. A few existing recent studies however reveal that the most severe hearing losses associated with OI originate not specifically in middle ear — of which the small bones deformations and possible surgical treatments have been explored extensively, as Dr. Pedersen reminded us —, but rather in the inner-ear or in a combination of both conduction and perception problems (i.e. middle and inner-ear deterioration) adding up with age. As far as we know, “fortunately”, very severe malfunctions and this combination factor occur in less than 5% of OI patients.

The causes of mutations and conditions inducing malfunction in the cochlea in some OI patients whilst not in others have not yet been identified. What we know is that, like the middle-ear bones, a fragile cochlea is likely to suffer from micro-fractures and chaotic bone remodeling. As the temporal bone is also prone to demineralization with age, perceptory cells finding themselves in a hostile environment, begin to atrophy. In the case of severe hearing loss — affecting patient’s capacity to understand spoken conversations even while wearing external hearing aids —, one may have recourse to cochlear implant (=CI) provided one’s cochlea hasn’t been obstructed. Implantation consists in the surgical insertion of a silicone electrode carrier in the inner-ear, coupled with a microprocessor implanted under the skin of the head (see Illustration). 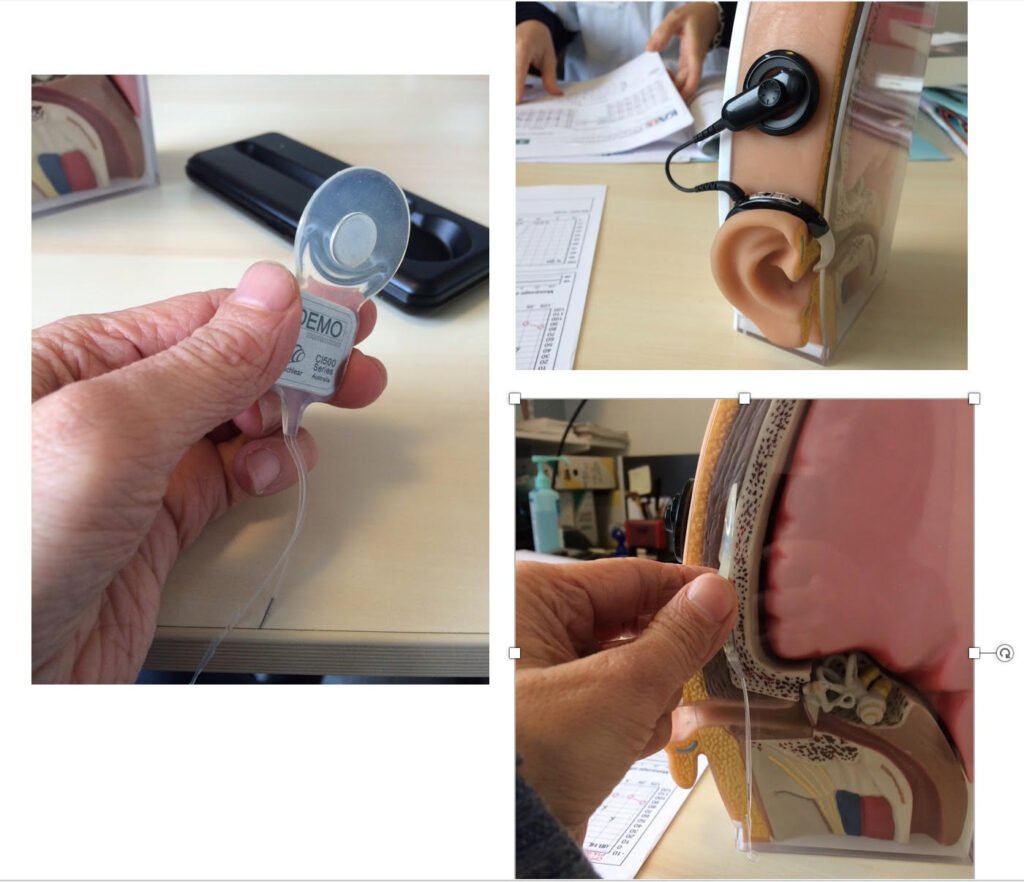 As surgeon Gunta Sumeraga, Freya and myself emphasized, it is absolutely indispensable to be examined by a surgeon who already knows OI or similar bone pathologies before making the decision to get an implant. With a cochlea wall as thin as ours, risks of cochlear perforation and meningitis are greater, as well as risks that the facial nerve gets stimulated (in addition to the auditory nerve aimed at) when the electrical processor of the implant is turned on, causing facial paralysis or jerks. 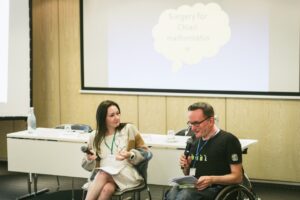 We still have some way to go before a solid body of work exists to improve the quality of life of OI people affected by deafness. Although this may be considered a secondary disability because it appears, in its stronger expression, after the age of 40, deafness should be treated as early as possible, when it is still mild. Regular (possibly annual) audiograms should be performed starting in early childhood and throughout adulthood. It is important also to be prescribed and to wear hearing aids as soon as medium range deafness is diagnosed, as well as to get a professional psychological follow up: these are key factors for avoiding the serious psycho-social damage untreated deafness may cause.

Each section of the Riga program began with patient testimonies that had been carefully and sensitively selected by members of the OIFE board, who read them aloud to us. The conference’s audience of about 80 people consisted primarily of medical professionals and secondly of patients 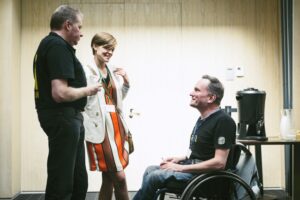 and OI family members of all ages, converging from all over Europe and Russia. Such diversity among the attendees surprised Canadian Pr. Jean-Marc Retrouvey who made a rather arduous presentation on 3D modelizations of cranio-facial characteristics in OI. He expected to have a mostly professional audience! However this is very much the specificity of OIFE: mixing audiences to allow active patients to document themselves whilst providing an opportunity for professionals to meet the people who make their practice meaningful, and not just remain among themselves.

The Riga meetings were successful at that, taking place in a beautiful setting and in a very friendly atmosphere. Thumbs up and a BIG thank you to Ingunn, Taco, Ute, Anna, Dace and her husband for their warm welcome. Many thanks also to Zita for her skillful simultaneous transcription that allowed deaf people such as me to follow the conferences.

A selection of power-point presentations of the individual talks and the abstract book can be found here. 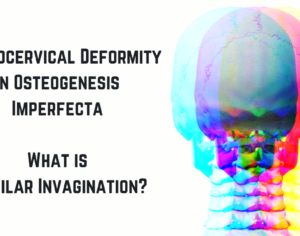 What is Basilar Invagination (BI)? 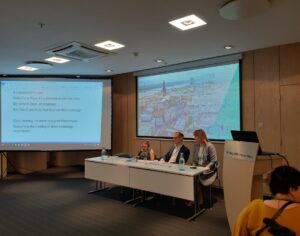 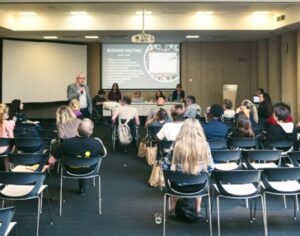 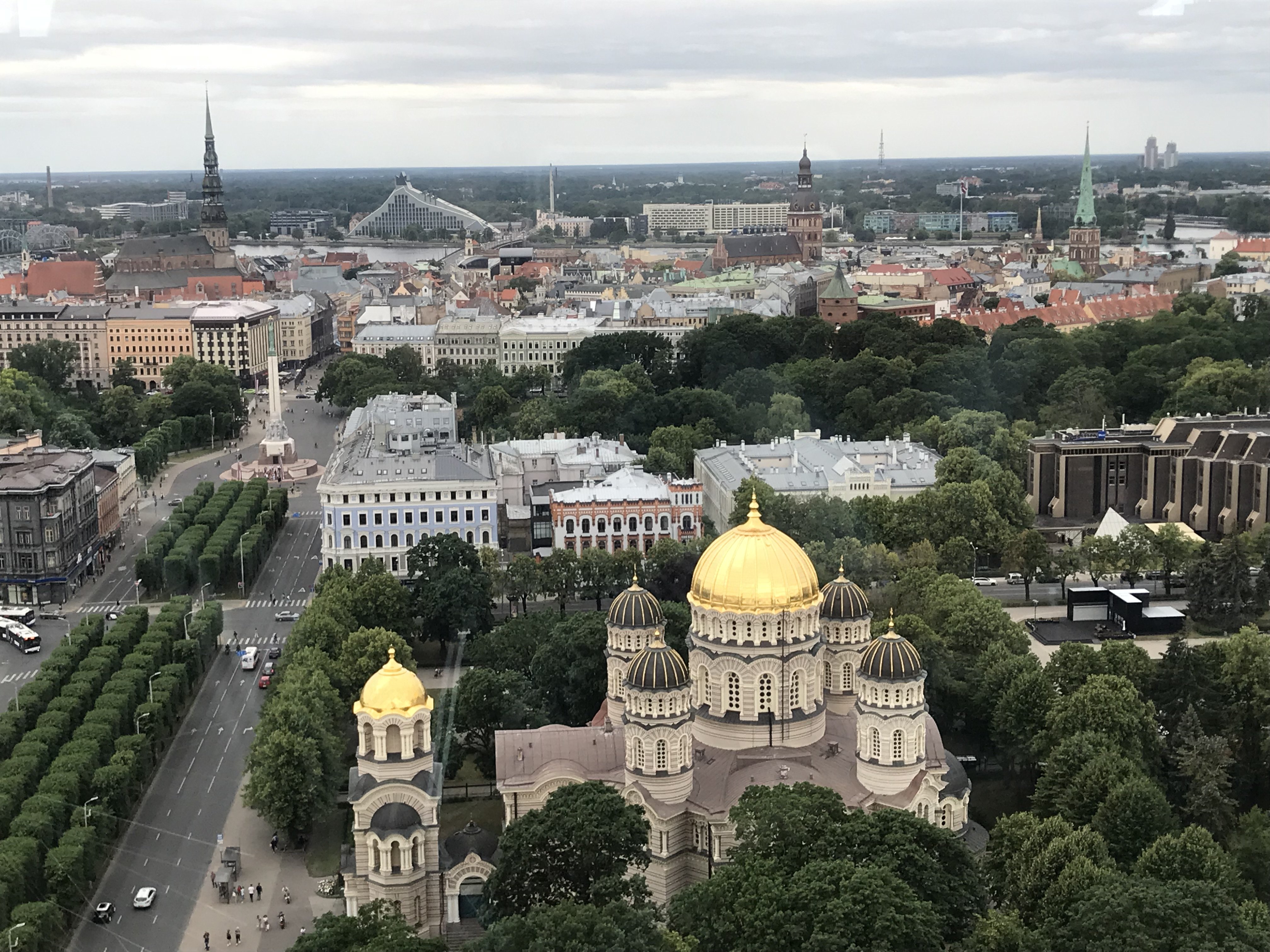 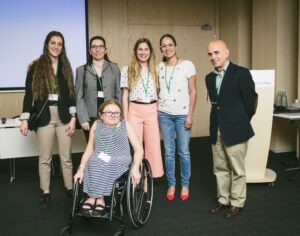 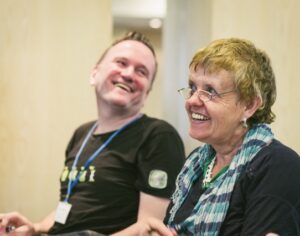