The 14th International Skeletal Dysplasia Society (ISDS) meeting took place in Oslo, Norway from the 11th -14th September 2019. OIFE was not present, but we asked Dr. Antonella Forlino (see photo in report below), who’s a member of OIFE’s Medical Advisory Board to report back from the sessions that were most 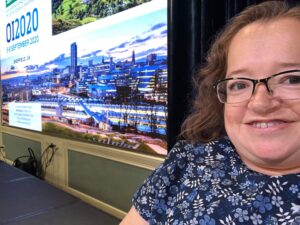 interesting for OI. On Thursday, September 12th, Session 3 of the Meeting focussed on Osteogenesis Imperfecta. Six oral presentations addressed basic and clinical aspects of the dominant and recessive forms of the disease. On Saturday, the Norwegian OIFE-delegate Rebecca Tvedt Skarberg (see photo left) gave a plenary talk about being a patient representative in the European Reference Network for Rare Bone Disorders (ERN BOND). 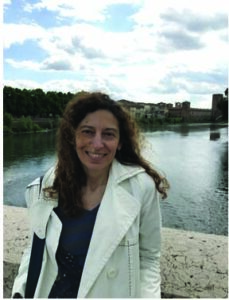 On Thursday,  September 12th, the Session 3 of the Meeting focussed on Osteogenesis Imperfecta. Six oral presentations addressed basic and clinical aspects of the dominant and recessive forms of the disease.

Dr. Shahida Moosa from Children’s Hospital, Boston, USA presented a new form of severe OI due to mutations in the MESD gene encoding for an endoplasmic reticulum chaperone specific for the receptors LRP5/6 involved in the WNT signal transduction pathway. Affected patients were characterized by severe osteopenia, skeletal deformity, multiple fractures also in utero and impaired ambulation. Bisphosphonate therapy was not effective in this OI form. The murine model knock out for MESD are available and they are embryonically lethal.

Dr. Antonella Forlino from the University of Pavia, Italy, presented the generation and characterization of two zebrafish models for the recessive OI forms, OI type VII and VIII knock out for CRTAP and P3H1 gene, respectively. These two genes are encoding for two of the three proteins involved in the hydroxylation in position C-3 of specific proline residues in the collagen type I. These fish reproduced the human OI bone phenotype and the mutant collagen intracellular retention. Their treatment with the chemical chaperone 4-phenylbutirrate improved bone regeneration.

Dr. Roberta Besio from the University of Pavia, Italy, reported a study on deep investigation of primary fibroblasts obtained from patients affected by the recessive OI type VII, VIII and IX carrying mutation in CRTAP, P3H1 and PPIB, respectively. Altered cell homeostasis associated to intracellular retention of mutant collagen I caused up regulation of unfolded protein response, autophagy and apoptosis in patients’ cells and treatment with 4-phenylbutirrate ameliorate cell function.

Dr. Michel To from the University of Hong Kong, spoke about the skeletal specific features characterizing OI type V patients, carrying mutation in IFITM5 gene. In particular Dr To described the functional impairment resulting in hip auto fusion in OI type V patients and discussed about the role of pre-operative administration of indomethacin to reduce the formation of post-operative femur hyperplastic callus.

Dr. Shavinthi Wadanamby from the University of Shieffield, UK, presented a retrospective study on 94 OI patients focusing on radiographic analysis of skull base abnormalities. Wormian bones and platybasia were the most common, whereas the low prevalence of basilar invagination suggested a possible reduction of this screening in children. The recommendation of a prospective study to provide national guidelines for skull base imagine in OI was proposed.