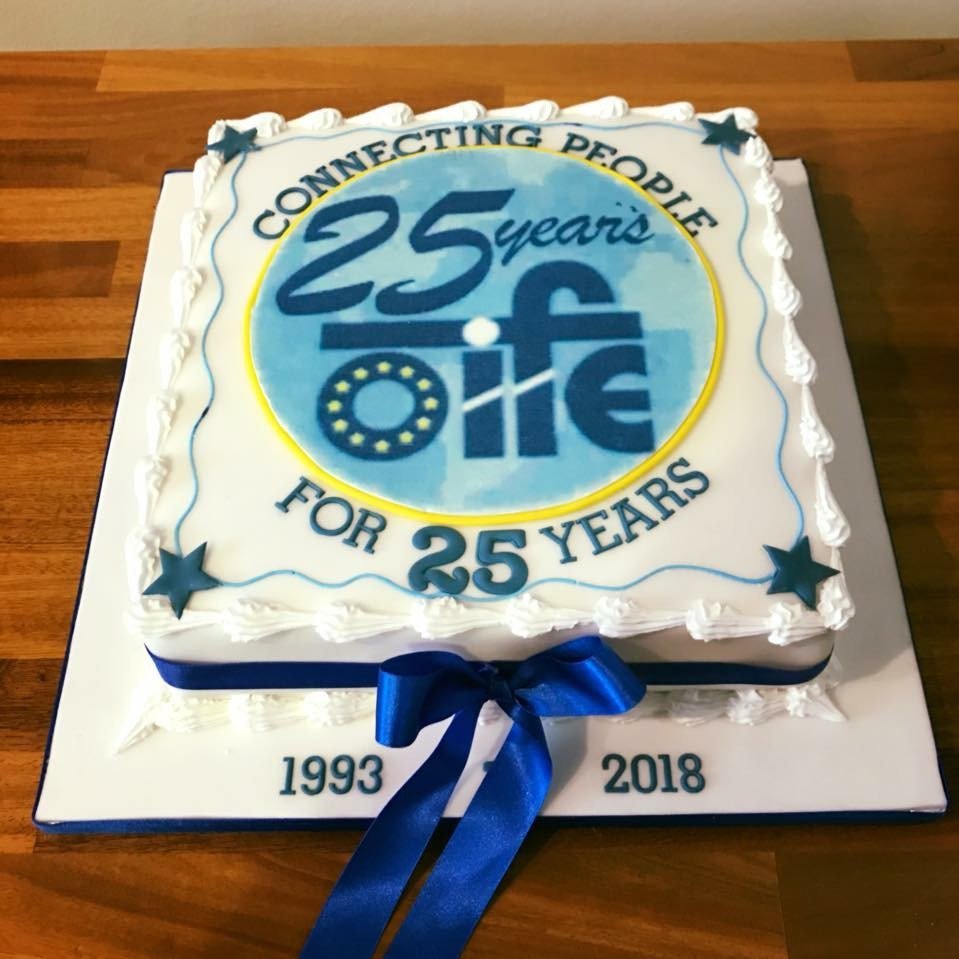 “An Anniversary is a time to celebrate the joys of today, the memories of yesterday and the hopes of tomorrow.” 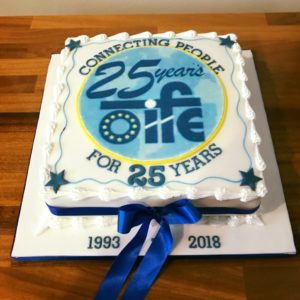 I would say this is pretty much what has happened in Dundee, Scotland from August 16th – 20th 2018 and not only for OIFE.

Actually the whole weekend was a celebration of happiness and of reunion or simply getting together and being able to share, tell, help, listen and learn…

This time a special aura was embracing the whole hotel and town…the 50th anniversary of Brittle Bone Society (BBS), the 25th anniversary of OIFE and last but not least – the Dundee Kiltwalk!

BBS 50th anniversary started the celebration with a scientific seminar on Friday the 16th followed by the opening of their History Bones exhibition. Saturday it was time for BBS’s family conference & AGM with participants from UK & the republic of Ireland. OIFE’s president Ingunn gave a shared talk during the conference about the value of national and international collaboration together with Tracy Hart from the OIF and Patricia Osborne from the BBS. On Saturday night we enjoyed an amazing gala dinner rich of entertainment, memories, stories and initiatives of which we will hear about also in the future.

On Sunday the OIFE had their Annual General Meeting (AGM). 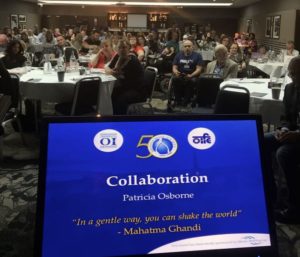 In addition to the normal AGM business like annual reports and budgets, parts of the AGM consisted of a shared session with the BBS. The purpose was to try to uncover the priorities in research of people with OI. The session was lead by dr. Nick Bishop together with BBS-member Penny Clapcott. Reducing the numbers of fractures did not get a lot of votes and it is clear that quality of life is now the real key. Something which is also the topic of a conference taking place in 2019 – organized together by Care4BrittleBones, OIFE and the OIF.

In this line, the new OIFE strategy fits perfectly. The new vision, mission and goals were presented to the AGM delegates and approved unanimously as OIFE’s strategy plan for 2018 – 2022.

The new OIFE webpage was launched, which will hopefully affect the whole communication, documents and identity of OIFE in the coming years.

This year we tried to focus less on formalities and more on sharing of ideas and experiences at the OIFE AGM. During the session called “A culture for sharing” the member organizations shared examples of concrete projects and different ways to fundraise for their organisations. It was followed by a workshop session to gather new ideas and ways to move forward. On Sunday – sharing of information and ideas were also in focus. This time about the topic was OI-research and what is going on in Europe and the US.

But Dundee was a milestone in OIFE history not only
because of the number of candles on the super tasty cake. Dundee was finally the place in which the roots that were placed 25 years ago met the new principles and ideas of the current OIFE. A new start is also the time for welcomes and greetings. Nigeria and South Africa were welcomed in the OIFE network and member’s family.

The Executive Committee was also renewed during the meeting.: Dace Liepina from Latvia and Ida Männistö from Finland replaced Vice-presidents Taco van Welzenis and Eero Nevalainen. And the EC now consists of only women, for the first time in history.

For our new honorary member Taco, it was an emotional moment, since OIFE was so close to his heart. For Taco, Lidy and Rob, OIFE was not only an association. It was somehow a family member to take care of and help to grow. Rob was the one who started it all with his passion for OI, which he has clearly passed on to the new generation who is taking care of OIFE, its network and development.

We hope Taco will have more time for great new adventures with his brand new rucksack and that he will look back on good memories, while reading the old editions of the OIFE newsletters (that was in the backpack). And we look forward to meeting him again during the next AGMs because Taco will always be part of the OIFE family.

So how was Dundee?
It was an amazing mix of work, OI business, networking, powerpoints, sandwiches, chicken, haggis, meetings but overall, after all, and most importantly HAPPY PEOPLE. 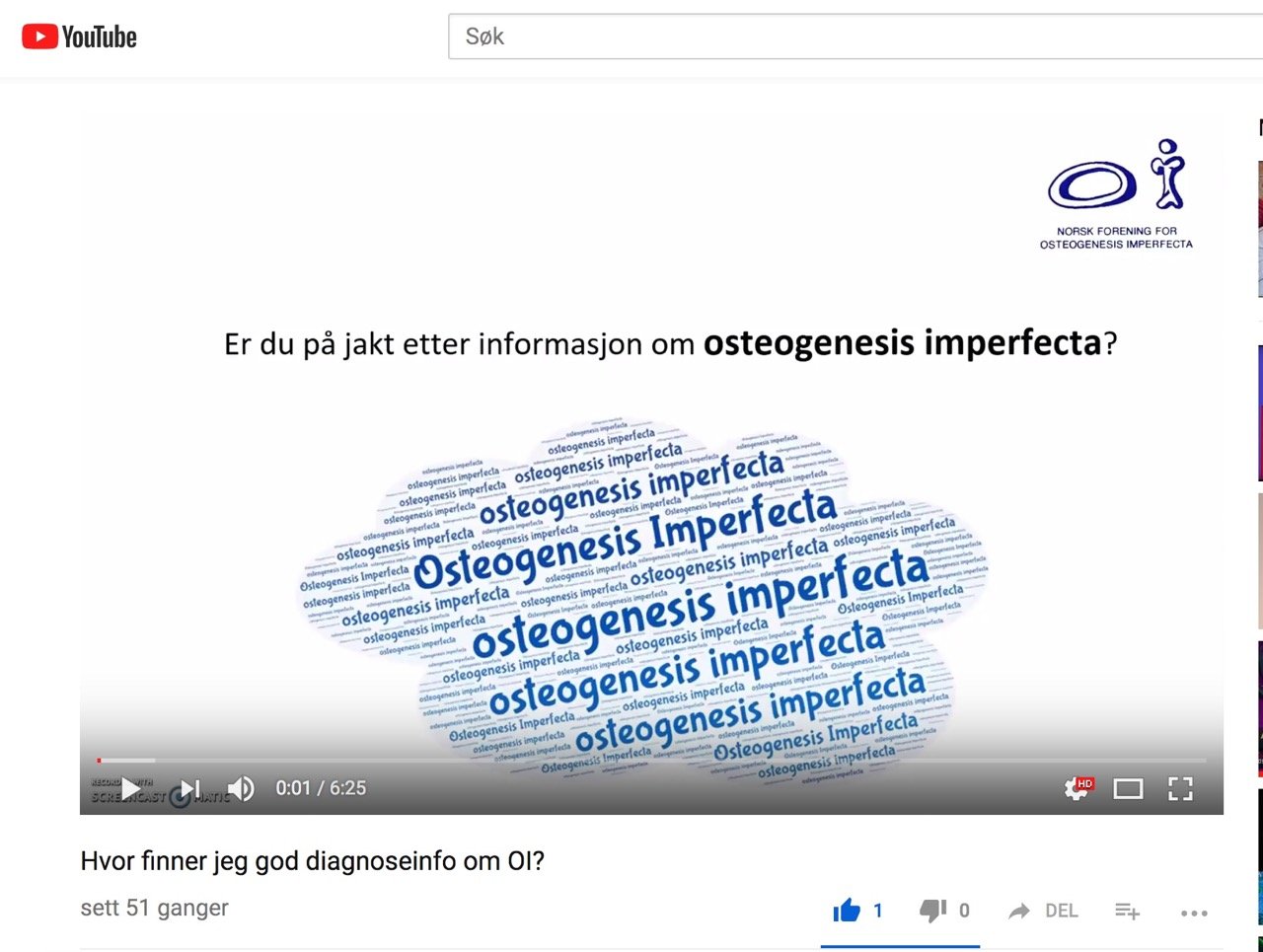 Where to find information on OI?